How do you Influence Without Authority?

When I was young we used to find adventure on the new home sites at the end of our street. A big pile of dirt would quickly become a trophy centerpiece to do battle for the reigning title of "King of the Mountain."

If you've never played it before, every person tries their best to take the hill by standing on top and fighting off the onslaught of people who are now trying to push you off. It was classic fun for a group of young boys looking for a challenge.

Of course, eventually we'd either get tired of this game or someone would get hurt so we'd switch to something less aggressive, like "Follow the Leader." We'd argue over who gets to be the leader first (usually whomever was last king of the mountain) and we'd all line up behind him. The leader would then lead us through an adventure of climbing, jumping, or swinging from something, the more dangerous the better. Both games could keep us entertained for hours.

When I look back on those children's games now, I can see a metaphorical perspective on how each of those games portrays an approach some leaders use to influence their teams.

King of the Mountain

In this approach to business leadership, power is taken or a strong hierarchial authority is given to one person. The leader now rules the kingdom with strong methods of persuasion. The general idea is "I'm the leader and you're not, so you have to do what I say. You don't get to question it or tell me what to do until you get promoted above me."

Influence of this type will usually result in teams who perform well and get things done on time. However, the turnover on the team is much higher. In other words, this leader achieves Compliancefrom the team or possibly... conflict. This team gets things done but they don't always feel very positive about it.

Methods used by these leaders are heavy-handed:

This game only works if the followers actually follow the leader. If no one follows, as John C. Maxwell says, you're just taking a walk! When we played this game, no one was making us follow. We actually wantedto follow. If a leader gets the team to follow because they want to follow, she's achieving a different type of result called commitment. This is where your team is getting things done and they have positive feelings about doing it.

To exercise this type of authority with your team, the leader has usually earned it. In other words, the trust, empathy, competence has earned a higher level of credibility for the leader. The team knows she cares about them and their success. The tasks are tied to a greater purpose.

As leaders, we all want commitment from our teams but we know that takes time and is not always possible. So when something needs to get done and there is no time, we may settle for compliance. But the leaders with the most successful teams know the strong positive feelings will outperform the negatively driven teams in the long run.

I'm ready to follow the leader... who's gonna step up?

Will it be you?
Russ 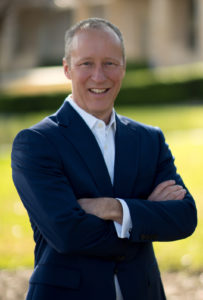 on Twitterif we haven't already?

OR Let's connect on LinkedIn.

OR Let's connect via my Facebookpage!

iSpeak teaches workshops on Professional Selling to help sales leaders gather the most important data and then use that information to create the right message. Are your sales presentations closing eyelids or deals?

Russ Peterson Jr. is the co-founder and Managing Director of iSpeak, Inc. - An award-winning professional development training company. Russ is a speaker, international trainer, and published authoron Professional Sales Communication and Business Communication. He delivers workshops, keynotes, and personal communication coaching services to business professionals in the US and around the world. His leadership blog assists leaders in giving voice to their vision. You can connect with Russ directly through Twitter, Facebook and LinkedIn.

Positively stop saying… “I can’t!”
Next Post: How to use the David-and-Goliath Story Template

This site uses Akismet to reduce spam. Learn how your comment data is processed.

This website uses cookies to improve your experience while you navigate through the website. Out of these cookies, the cookies that are categorized as necessary are stored on your browser as they are essential for the working of basic functionalities of the website. We also use third-party cookies that help us analyze and understand how you use this website. These cookies will be stored in your browser only with your consent. You also have the option to opt-out of these cookies. But opting out of some of these cookies may have an effect on your browsing experience.
Necessary Always Enabled
Necessary cookies are absolutely essential for the website to function properly. This category only includes cookies that ensures basic functionalities and security features of the website. These cookies do not store any personal information.
Non-necessary
Any cookies that may not be particularly necessary for the website to function and is used specifically to collect user personal data via analytics, ads, other embedded contents are termed as non-necessary cookies. It is mandatory to procure user consent prior to running these cookies on your website.
SAVE & ACCEPT