7 Secrets to Get Your Next Audience to Love You

I knew it wasn't going to be your normal conference kickoff keynote when I entered the ballroom and found a bongo at every audience seat. I was in the audience that day with about 400 other attendees. We couldn't help but pick up the bongo, inspect it and experiment with tapping on it. Then one person stepped out onto the stage and a hush fell over the audience.

As we anxiously awaited his first words, the leader on stage didn't speak. He stood in front of a much larger bongo on the stage and with one powerful motion, he struck the bongo once. We all watched. He just stared back at us and then he struck it again.  This time after he struck the bongo, he motioned with an open hand to the audience. As if we heard the unspoken command, we all instinctively struck our bongo once in response to him.

This follow-the-leader process continued until both the stage and the audience were playing a high-energy duet of amazing beats with additional percussion instruments from the stage band. After 30 minutes of adrenaline and fun, the speaker stopped the music and delivered an amazing 15-minute keynote on the importance and beauty of effective teamwork.

It's time to Break the Script

That event was delivered by the Drum Cafe. They do an outstanding job of kicking off events with high energy with a message. They are successful for many reasons, but I use them as an example here today because they effectively do what the Heath Brothers (Chip and Dan) call "breaking the script."

Think about it. When you attend a conference you're expecting a script. The script goes something like this:

This event was already different. The script had been broken from the very start by beginning with the Drum Cafe. When we speak to an audience, we should consider how we can break the script to create a memorable moment. These memorable moments are not just for the sake of being memorable. The benefits include a more engaged audience and followers who are more likely to implement changes as a result of the event.

How can we break the script in public speaking?

This is what I've seen in some of my students and from other professional speakers I've had the privilege to work with over the past 20 years. Each of these break-the-script moments left a lasting impact on me and I still remember their presentations to this day.

Movement on the stage - It was the third team presentation I was observing in Houston. Each team previous had chose to stand at the lectern and deliver their messages. When the third team began, the first speaker stepped out from behind the lectern and moved to center stage in silence. Then he began to speak. He painted a landscape that wasn't right. The audience could feel there was something wrong with the picture. They felt it too. Then he said, "This is going to be problem with a heavy cost if we don't address it."At that moment he stepped toward the lectern while saying, "So the question for our group was, How do we address this issue with the limited resources we have available this year? That's where our project begins." As he made that final statement, he was standing back at the lectern and bringing up the first slide to explain their approach. Audiences love movement and they love it even more when the movement is in alignment with the message.

"The secret to humor is surprise." - Aristotle

Change the slide appearance - Kevin Karschnik, the co-founder of iSpeak, is a master of facilitation. He does an outstanding job engaging his audiences into a conversation. One way he gives his audiences variety is with his slide construction. Kevin looks at his slides as a whole story. He creates a flow to the slides so they align with his story. Then, he makes what he calls bumper slides to show a natural transition from one topic to the next. The bumper slides provide either a visual or a question to consider as the story of the presentation naturally progresses. His audiences are never lost or disengaged.

Pause - Most speakers we work with tend to fill all available space with sound. They are either talking or they are transitioning to the next thought with a sound like "ummmm." If you ask any professional speaker what you can do to be a better speaker, they will give you a handful of things you can work on. But, every speaker will give you this tip... "You must master the pause." The pause is one of the most powerful tools you can use as a speaker. When used effectively it helps provide meaning and feeling to your message. It also sets you apart from 90% of the other speakers who never give their audiences the silence they desire. Pausing works great at a transition or after a question or statement where you want the audience to think about what you just said.

"Silence is one of the great arts of conversation." - Marcus Tullius Cicero

Audience participation - Craig Valentine does a fantastic job with audience participation and engagement. One exercise he does is to have everyone stand and look at the person next to them. He asks them to take note of their appearance. Then, he has them turn away from their partner and change one part of their appearance (remove your glasses, turn your collar up, button one button on your coat, etc.) Then when you turn back around to look at the other person, he asks you to notice that one change. He then asks everyone to turn away and change 20 things. Everyone is stunned and then laughs. His point is that it is easier to make one small change and apply than to make many changes at once. Take one thing away from his talk and go apply it!

Don't use slides - when everyone else seems to have a slide for everything, deliver your message with no slides. Be prepared to send out digital notes to the attendees afterwards. I was privileged to see former U.S. Speaker of the House, Newt Gingrich deliver a keynote in Florida several years ago. Newt delivered his message with poise, confidence, and humor using no slides or any notes. It was a welcomed break from the script of endless slides from the other speakers!

Go Old School on them - Almost 20 years ago I was in Las Vegas as part of an audience of 2,000 sales professionals watching a speaker deliver a message about the industry. The speaker used an old-fashioned overhead projector with transparencies and markers, while sitting on a stool. He didn't write words on the transparency projector. He drew a picture and walked through it. The step by step delivery and the drawing was so simple and easy to understand, every salesperson had a new appreciation and understanding of the business problem this company could solve for customers.

Tap into the emotions - A student in Houston shared a brief story about her brother being killed on the job and the importance of safety in the workplace. I'll never forget her ending line... "At the end of the day, it's not about the hats... or the tee shirts... or even the bonus... It's about YOUR headlights in YOUR driveway." Wow. You could've heard a pin drop in that room. All messages generate a feeling. Unfortunately, in many PowerPoint Slide presentations the feeling is one of apathy or boredom! Think about the feelings you want your audience to have after you finish speaking. Remember, nobody moves until they feel something. Even if you want to argue with me and say, "That's not true. We move in a direction strictly based on what the data tells us!" I would argue back that you're moving in that direction because you feel confident the data is accurate.  Confidence is a feeling!

What moments of impact have you seen from speakers?

Always looking for another way to break my own script...

OR Let's connect on LinkedIn.

Get the Corporate Ovations Video Self-Study Course for FREE! 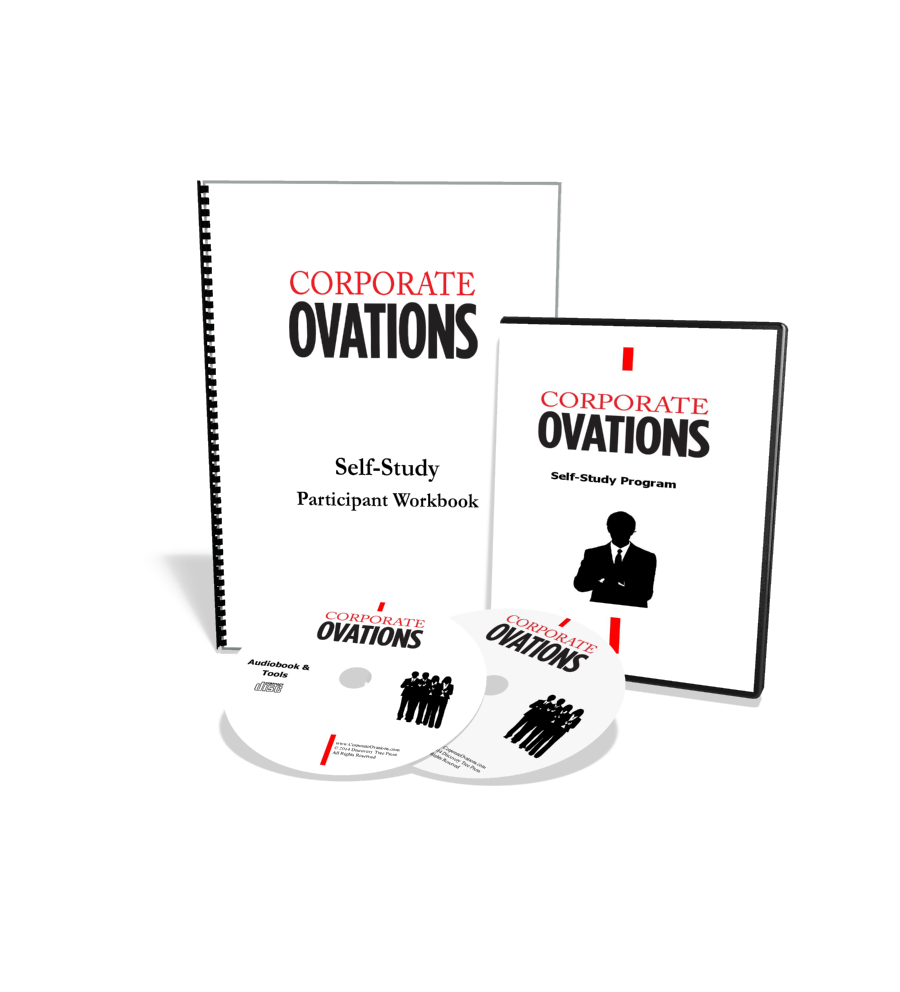 Public speaking and presentation skills are a key to your career success. Learn the same skills we've taught to thousands of corporate customers over the past decade in this FREE video-based program. It's all designed to help make you a better speaker no matter what your skill level.

When you sign up for my weekly blog I'll send you a link to iSpeak's Corporate Ovations Self-Study Course. It comes with 12 lessons on public speaking. Each lesson includes a teaching video, exercise, application exercise and a challenge to get you out of your comfort zone.  You can get the Self-Study Course here.

The Power of Moments: Why Certain Experiences Have Extraordinary Impact, by Chip and Dan Heath

iSpeak teaches workshops on Professional Selling to help sales leaders gather the most important data and then use that information to create the right message. Are your sales presentations closing eyelids or deals?

Russ Peterson Jr. is the co-founder and Managing Director of iSpeak, Inc. - An award-winning professional development training company. Russ is a speaker, international trainer, and published author on Professional Sales Communication and Business Communication. He delivers workshops, keynotes, and personal communication coaching services to business professionals in the US and around the world. His leadership blog assists leaders in giving voice to their vision. You can connect with Russ directly through Twitter, Facebook and LinkedIn.

Previous Post: « Part 3 of 3: How to Turn Your Presence into LEADER Presence
Next Post: “Dear Younger Me…” – 5 Things I wish I knew as a young Sales Professional »

This site uses Akismet to reduce spam. Learn how your comment data is processed.

This website uses cookies to improve your experience while you navigate through the website. Out of these cookies, the cookies that are categorized as necessary are stored on your browser as they are essential for the working of basic functionalities of the website. We also use third-party cookies that help us analyze and understand how you use this website. These cookies will be stored in your browser only with your consent. You also have the option to opt-out of these cookies. But opting out of some of these cookies may have an effect on your browsing experience.
Necessary Always Enabled
Necessary cookies are absolutely essential for the website to function properly. This category only includes cookies that ensures basic functionalities and security features of the website. These cookies do not store any personal information.
Non-necessary
Any cookies that may not be particularly necessary for the website to function and is used specifically to collect user personal data via analytics, ads, other embedded contents are termed as non-necessary cookies. It is mandatory to procure user consent prior to running these cookies on your website.
SAVE & ACCEPT